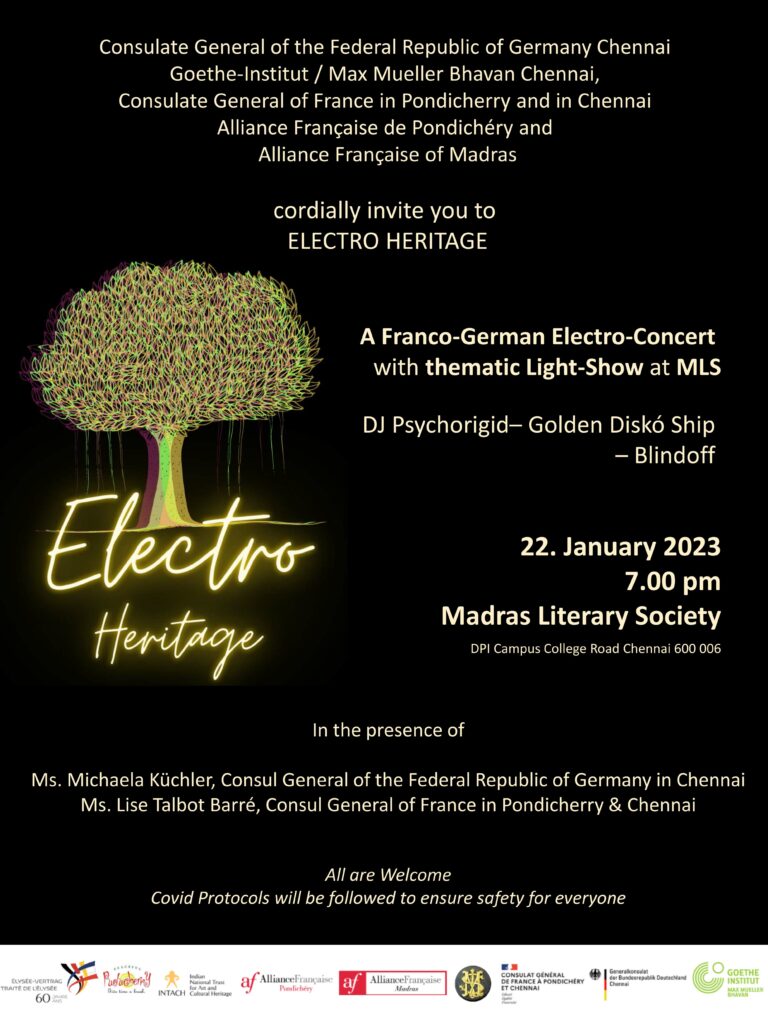 Living, resilient by nature, a tree adapts and feeds on its environment. Like him, culture reinvents itself just as much as it resists the isolation of confined artists or the loss of bearings of a modern society in search of meaning.

The banyan tree, emblematic of India, illustrates this analogy to qualify a living culture, in constant evolution, with roots as traditions but also branches turned towards progress and novelty. Their joint activity ensures durability and longevity; the vegetal spun metaphor imposed itself. Led by French, German and Indian partners, the electro heritage project has its roots in the historical buildings as well as intangible musical heritage of the subcontinent and deploys its canopy of electronic music and architectural mapping.

The Alliance française of Pondicherry and the Goethe Institute of Chennai supported by their partners are all branches of this sacred tree of the subcontinent and represent an India-Germany-France trinity demonstrating that the mix of cultures of origin is an integral part the answer to the questions surrounding the resilience of culture as well as its multidisciplinary aspect. Electro heritage is available on several levels, sometimes transverse and aims to illustrate the ability of culture to reinvent itself, and to mix disciplines at different periods. Musicians will create ancient musical traditions and modern sounds to produce a harmony that stretches through time. The concerts that will result from the residency in Pondicherry will be produced in an endangered heritage setting on which a mapping creation will be projected.

These festive sound and light shows will offer a new perspective to a population that has forgotten the richness of a monument, a building sinking into oblivion and in danger of disappearing.

THE PROJECT BY ITSELF

It is the meeting of 3 groups of specialized artists that will make their artistic sensibilities converge towards the construction of a common project during an artistic residency in Pondicherry: A DJ, a German-Indian group and a lighting artist. They will create two shows in a historical place in Pondicherry and Chennai representing their architectural memory, an ancient place and maybe forgotten, will become a point of interest again. It will be covered with a sound and light shield that will highlight its importance, mark the participants with its new dimension and preserve its heritage.

In addition to sound and light, the light artist will create a facade in a Mandala of seeds sprouting and growing towards a light source which will be superimposed on an opening in the building on the background. The video will be produced in time lapse and then mapped upstream. The building is seen offering its own discourse while strengthening the link to nature and more particularly to the analogy of the banyan tree. The intertwining of nature and architecture, gives a glimpse architectural heritage as an ecosystem with plant life. EN

It is therefore a multidisciplinary event which offers the possibility of combining the playful and festive aspect of a conventional concert with an innovation platform offering not only a show, interactive installations, but also, downstream and upstream, conferences and workshops.

The creation of a tri-national musical collective is also an important objective of the project to sustain it.

Of roots and leaves

South Indian architecture is rich with world influences and history. But some places tend to disappear in favor of more modern constructions. Anchored in the urban landscape, these buildings represent the heritage, the roots essential to the knowledge of its culture of origin and must not disappear from the urban fabric

The buildings will be selected by two entities: a collective of architects from Chennai and the Indian National Trust for Art and Cultural Heritage (INTAC)

It is therefore a multidisciplinary event which offers the possibility of combining the playful and festive aspect of a conventional concert with an innovation platform offering not only a show, interactive installations, but also, downstream and upstream, conferences and workshops. The creation of a tri-national musical collective is also an important objective of the project to sustain it.

Of roots and leaves

South Indian architecture is rich with world influences and history. But some places tend to disappear in favor

of more modern constructions. Anchored in the urban landscape, these buildings represent the heritage, the

The buildings will be selected by two entities: a collective of architects from Chennai and

the Indian National Trust for Art and Cultural Heritage (INTAC)

The choice of artists was made according to the principle of trinity stated above:

Born in Cologne, cultivated by the French Touch, European electronic music is by far the most popular with the world’s youth. The event can only exist by drawing on this dual Franco-German heritage. One of the cradles of settlement of Reunion comes from the city of Pondicherry. It seemed natural to involve artists from the island to show another side of the resilience of culture across time and space. The selected German artist has already shown a strong interest in India and has completed a residency in Goa where she has already forged ties.

Born in Moufia (a district of the capital of Reunion) from a family of Tamil origin, Psychorigid represents a certain segment of Reunionese society, those who want to dance to rhythms that correspond to them. His style could not be programmed in a club on a Saturday night, but he responds to the search for an & quot; offbeat

tropical&quot; atmosphere that draws its influences from Jamaica, Angola, South Africa, Mozambique, India and Latin America. This atmosphere is the & quot;Moufia Bass& quot;…

DJ Psychorid will be able to integrate the traditional sounds of his heritage into his set and bring them up to date.

Blindoff, residing in Reunion, is a lighting artist. He is currently working on land-art and architectural mapping, such as for the 100th anniversary of the Oceanographic Museum of Monaco. Part of his happening work comes in 3 versions:

– A work of Digital Land art: Multimedia performance in situ in the middle of nature with the objective of a photographic and video work questioning the concepts of landscape, natural beauty, human artistic production, environment and sustainable development via a naturalist approach, scientist and artist during a high-tech art production on the pattern in nature. – “Brown projections” (Guerilla mapping): similar to Street-art, but totally ephemeral. – The concept of anti-show: Work produced in situ within the framework of a festival or an artistic event but as

a “pirate” without anyone being informed (organizers and public), before or/and once the site emptied of its public. Dissemination only takes place a posteriori via social networks and the media. He is also known in the world of VJ-ing for his masked character, used as an extension of his happenings, as a link between live shots and a series of narrative contextual loops. Mixing with the public, he integrates and then provokes the people present in the public as actors of the videos via live shots by mini-HF camera broadcast on the broadcast screen of the video mix

Berlin-based composer, musician and sound artist. She is particularly interested in breaking down conventional performing practices and genre boundaries. In addition to working on her own musical projects and sound installations, she enjoys collaborating with artists from all kinds of perspectives and enjoys developing sounds for video, film, dance, poetry, performance and visual arts over the course of recent years.

Whats on 2023-01-18
Alliance Française Madras
Share !
Previous: And when she roared the universe quaked – An art exhibition
Next: Cine club